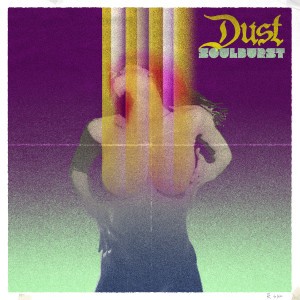 Dust gets 10/10 – read why here: “The rock-bluesy album, Soulburst is already the best of this year, and who wants to top it, they must exert themselves”. Thank you, MetalNews (Ch)

“My favorite is “Waiting For You”, because the voice and the guitar solo – you tear the heart and soul from the body and try to release all fires of hell. Sure, since GARY MOORE can, you need to make them fit, and here it breathe new life and they play so skillfully – this must be put first as a favourite. That, dear people is an absolute hammer part, by far the highest number on a lousy good album. “Blind” includes not only the album, it also completes it, it rounds up the piece of the CD. What DUST deliver here is great cinema. Especially when you consider that the guys after 2014 just baked their second album”. (10/10) http://metalnews.ch/dust-soulburst-am-20-05-2016/

“Who misses Badlands as much as I can carry on with DUST, where Jake E. Lee and his associates stopped at ” Voodoo Highway ” . The guys from Stockholm play well and hung from Seventies hard rock , which was only sprayed in the eighties again properly – and since then everything can remain so. Solander is a shouter and creates a positive vibe between Ray Gillen and Tony Martin , and Johan Niskanen convinces as his pretty versatile right-hand man , a guitarist who has the blues , but this does not fall into lethargy , but also so many times so correctly. Unfortunately, the songs are not as catchy to bring instantly glow. One has to shon a bit pure work , but then you get an album with earth and nature”. ( 8/10 )  Frank Schäfer – Rock Hard Mgzn, DE (July 2016)

“The album kicks off with “Sun Rising” which instantly shows the band hasn’t changed their winning concept from the debut. Next up is “The King Is Coming” which really shows the band’s Badlandsinfluences with the mighty Roger Solander sounding like Ray Gillen’s long lost cousin. Johan Niskanen is a bluesy riff machine with a lot of tasty leads under his belt, often skipping the rhythm guitar during the solos and leaving it up to the tightly knit power rhythm package of bass player Bernt Ek and drummer Örjan “Dr Rock” Englin to fill every crack and crevice. It’s however not all power riffs and heavy rhythms. “Waiting For You” is a cool blues oriented ballads, with a hint of vintage Whitesnake (when Dave still had a voice and they were a blues rock unit). “Free” is based on almost the same, more or less sacred and forbidden but still often used, riff pattern of Hendrix “Freedom”. A tad too close, but still a great song. “Soul Stealer” is another cool riff rocker in line with the rest of the album. The album closes with a cool Univibe drenched guitar floating on top of the groovy rhythm package and Solander soaring above it all with his bluesy melodic top notch vocals. All in all a solid follow-up to a killer album! If you’re into bands like Badlands, King Karma etc., don’t miss these guys out!”  – Janne Stark – http://starkmusicreviews.blogspot.se/2016/05/dust-soulburst-cd.html

“Classic Rock never dies! This band is simply called Dust, and you can already estimate roughly what to expect, the music is forever timeless, even if it will over the years get dust, it will always be worth listening to. The great singer Roger Solander, sounds in his best moments as the eternal Ronnie James Dio or David Coverdale. Even the classic Hard Rock, the Dust play with the start of opener “Rising Sun”, recalls the time being in bands like Dio / Rainbow, Whitesnake, Free or Bad Company. In the opener’s also there to listen to a cool, be tipptes guitar solo. Brings joy! That album was recorded live in the studio, is understandable given the prima-attuned way. So a living album has emerged that more than once spread the feeling of a jam session, and thus provides the joy of music to the fore. As mentioned, one with Roger Solander a Super singer in the series, the natural as the great models sounds, but with charm and spice gives the songs the necessary depth. And the guitarist Johan Niskanen, the bassist Bernt Ek and drummer Örjan Englin know their craft exquisite and bring the spirit of the glorious end 70 /80er Classic Hardrock times over very knowledgeable and authentic. Here the modern fans will again spin off, the guys with jeans habit – is the target group – with patches of Whitesnake, Rainbow and Dio found in the sound of Dust without hesitation immediately. Therefore, the target group is defined. Dust could cause a stir in the Classic Rock sector ….” (8/10) http://monkeycastle.de/Reviews/Dust-Soulburst/

Neckbreaker – Das unabhängige Musikmagazin‘s review of Dust – scores (8/10) and advice to “consume “Soulburst” at volume 11th, and Fans of good rock music should not miss “Soulburst” under any circumstances” – Thank you, Neckbreaker! “In Sweden there is obviously something in the water. No wonder, then, that the very cool Hard Rock of DUST has Sweden as its origin. The quartet offers on “Soulburst” rock music at a high level.

This is already the opener “Sun Rising” more than clear, the voice of Roger Solander sounds absolutely insane, to the cool guitar riffs of Johan Niskanen and really oppressive bass Bernt Ek. In combination with the drums of Örjoan Dr rock Englin is already clear at the beginning of the album, how much potential there is in this band. A better start one barely could want for an album. One should consume “Soulburst” best on volume 11th. Similarly awesome it comes with “King Is Coming” further, which may, among other points with a not really new, but very cool intro and a good chorus. The groove monster “Come On” recalls the beginning of some jam sessions, and here you can hear in my opinion clear that the songs came live in the studio. Something quiet it will be with “Waiting For You” before the band with “Bad Boy” striking out the riff-attack and revive with “Free” the Blue Rock. “Soul Stealer” has a good chorus, and then very groovy “Keltic Wheel” before “blind”, and a great ending for “Soulburst” is found.

I’m really glad that many shots are again live in the studio. Also “Soulburst” one hears this procedure significantly. It acts as if the music breathe more, which in many of today’s practices is no longer quite the case, unfortunately. Also sound technically confident this second plate, and the voice of singer Roger Solander can not be praised highly enough. Combined with the brilliant guitar melodies, guitar riffs and the good rhythm section provide DUST (yet) constitute a real insider tip – http://www.neckbreaker.de/reviews/cd-reviews/8994-dust-soulburst