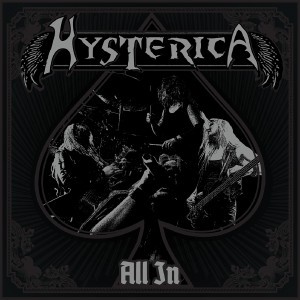 As part of last year’s Tune Tuesday travels, we “traveled” to Sweden and I shared my love of the all female heavy band called Hysterica! I have listened to their last two albums and genuinely love their sound and as much as I love female fronted bands, I have never listened to an ALL girls band and liked them this much! The band consists of lead vocalist Anni De Vil, Bitchie on guitars, Satanica on bass, and Helln’ on drums. I’ve been looking forward to this new EP, and so when I saw that it was out last month, I wondered if us in the states would get it too. Luckily, a few weeks ago I went on my Spotify and found it on their profile.

The first song is called “Lock Up Your Son” and I am really glad that it’s got this mysterious beginning and suddenly it gets very heavy! Anni’s vocals are really good, meshes well with the sounds of the guitars and drums. Anni’s harsh vocals have gotten better and I’m so glad about that! She didn’t really do them in the first album, but with the second she did and it wasn’t the best I’ve heard. So to find out through this EP that they’re more powerful, it’s so awesome! Anyways, the second song is the title track “All In” and it sounds so good! I love how the guitars sound in this one the most! I love the chanting of “all in” at the end of the choruses! Always something fun to add into a song I think! Definitely a good song to sing along to during their live shows! It gets kind of soft towards the middle and has a nice somewhat gentle guitar solo at the end.

The next one is called, “Free Me” and it is a slower at the beginning and as Anni starts to sing everything kind of dies down but then picks back up. Honestly, there are a lot of elements to this one that I should like, but right now I don’t. So moving on to the next one and it’s called, “You’ll Remember My Name” and boy! I love how this one sounds so much! It’s so heavy and mighty! You know after a while you tend to forget that these are all females making this sound. Everybody is so used to seeing males guitarists and drummers, but these women have perfected their craft so well! That’s why it’s so important to listen to the music and not go by who is the one making it. I could have been fine if this one was an instrumental. As much as I love Anni’s vocals on this one too, I would’ve still liked an instrumental of this one! Last song is called, “Ease My Mind” and it starts off with an acoustic guitar with Anni’s beautiful voice! It’s really nice and clean.This could be another favorite of mine! Gohmeghan